Clear up any doubts.
It’s a risk-free test for you and your baby.

NeoTest is a non-invasive prenatal test, performed with maternal blood. It is completely safe for the mother and her unborn child. NeoTest can potentially examine all 24 types of chromosome, to bring peace of mind to future mothers.

NeoTest enables established pregnancies (from 10 weeks of gestation) to be assessed for certain chromosome abnormalities that can lead to late miscarriages or the birth of a child with serious congenital abnormalities.
NeoTest offers a high detection rate for the specific chromosome abnormalities tested and a low false-positive rate. Importantly, the non-invasive nature of the test means that it does not increase the risk of miscarriage – unlike traditional invasive prenatal tests

Choose the test that best suits your needs

Detects abnormalities in chromosomes 21, 18, 13 and the most common anomalies in the sex chromosomes (X and Y).

NeoTest, the safe, non-invasive test
for your pregnancy.

At Juno Genetics we provide a personalised genetic counselling service before and after the tests at your doctor’s request.

NeoTest has the highest information rate on the market. We obtain results in 99.9% of the samples tested.

For NeoTest we take a maternal blood sample to obtain the genetic information of the fetus. This guarantees safety for all our patients and their babies.

NeoTest uses a platform which has the greatest depth of analysis on the market. The high sensitivity allows results to be obtained even when the amount of foetal DNA is relatively lower than the foetal-fraction threshold established by other laboratories (4%).

The test can be performed any time from 10 weeks’ gestation.
I'm interested

These are the steps with NeoTest, ask your gynaecologist

These are the steps with Neo24, ask your gynaecologist

This is how it all works: from the moment you decide to send a sample to Juno until the results are in your hands just 3/5 days later

Leave us your details and we will contact you. 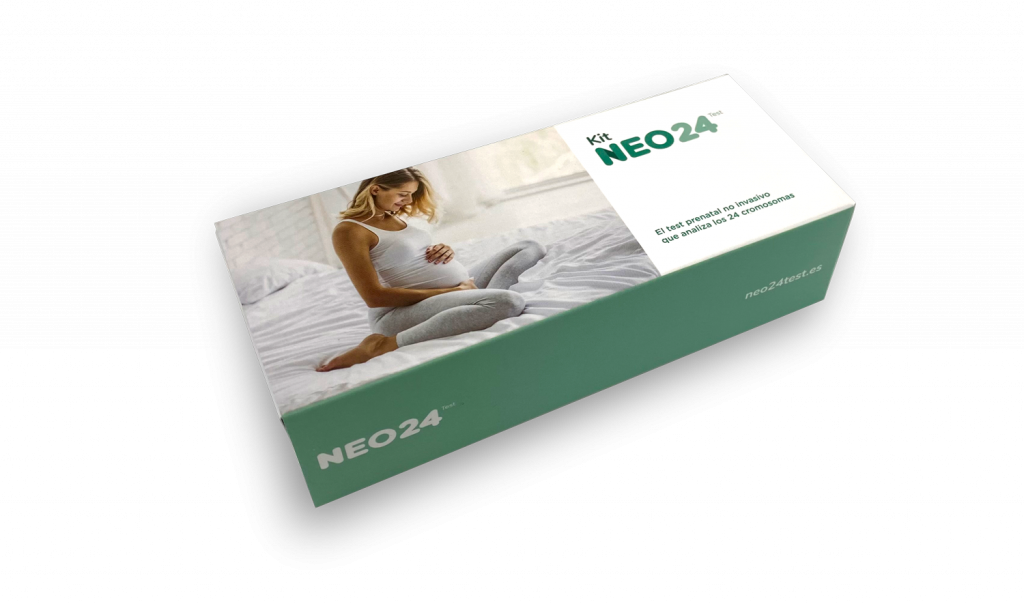 And receive it in less than two days 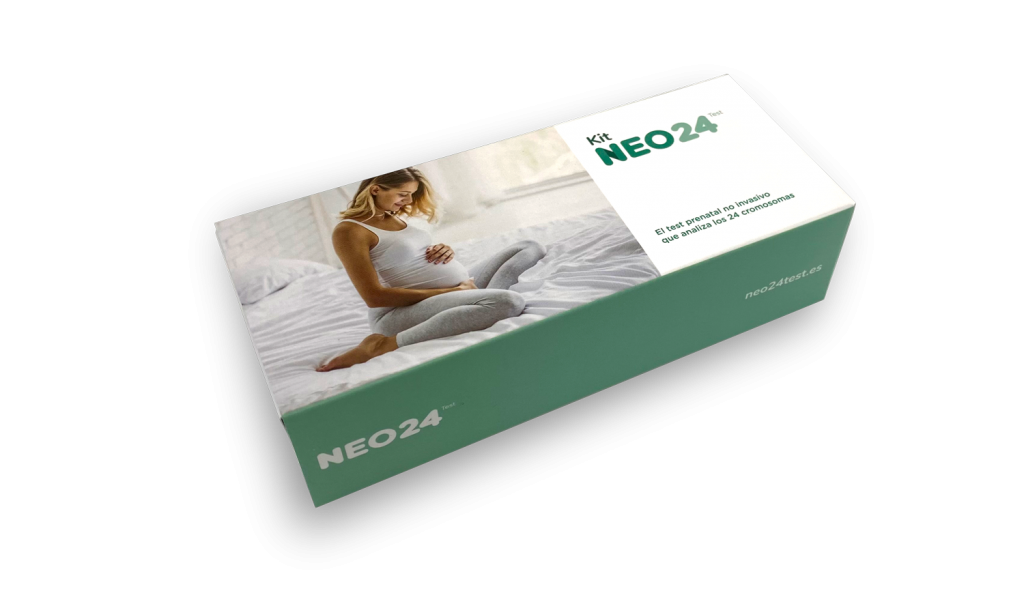 And receive it in less than two days

This is what our patients most frequently ask us

What are non-invasive prenatal tests?

What is the Neo5 test for?

How is a Neo test performed?

A blood sample is taken from the mother’s arm. Juno Genetics receives the sample and extracts DNA from the blood, some of which belongs to the foetus. The DNA is analysed, allowing a variety of common chromosome abnormalities to be detected. Juno Genetics issues a report indicating whether or not the foetus is predicted to have the correct number of chromosomes. If requested, the sex of the foetus can also be revealed.

When can I take this test?

It can usually be performed from week 10 of pregnancy

How long will it take to get the results?

Can I get tested if my pregnancy is by natural conception?

Of course, this test is for all pregnant women, whether they come from an assisted reproduction treatment or by natural conception.

What are non-invasive prenatal tests?

Yes, this test works equally well for all pregnant women, whether they conceived naturally or with the help of IVF.

Why is the NeoTest said to be a non invasive treatment?

Because it does not touch the fetus. No cells are removed from the fetus, placenta of amniotic fluid. Instead, DNA from the fetus is collected from a sample of the mother’s blood.

Does this test replace amniocentesis and chorionic villus sampling (CVS)?

In general terms, non invasive prenatal tests screen for chromosome abnormalities in patients who do not have any medical evidence of a problem affecting their pregnancy at the time the test is undertaken. The test is carried out without directly sampling cells from the fetus or placenta and can be done from 10 weeks of gestation. In contrast, amniocentesis takes cells from the amniotic fluid surrounding the fetus, while CVS samples cells from the placenta, processes that have been associated with a small risk (less than 1%) of miscarriage.

Invasive prenatal tests are usually undertaken later than NIPT, from about 14 weeks in the case of amniocentesis. Non-invasive prenatal tests are very good at detecting an abnormal number of copies of individual chromosomes, but some types of chromosome anomaly cannot be identified. Examples include, triploidy and changes that alter the structure of chromosomes. Amniocentesis and CVS offer the possibility of generating a complete karyotype, allowing additional types of abnormality to be detected.

Amniocentesis or CVS should be undertaken whenever recommended by a doctor. Such tests should be used when a non-invasive test has indicated that an abnormality is present, allowing confirmation of the result.

They should also be considered in cases where ultrasound or other indicators are suggestive of an abnormality, even if NIPT did not detect any abnormality.

Does the NeoTest study twin pregnancies?

The Neo5 and Neo24 tests can be performed when there is a twin pregnancy.

The best way to alleviate concerns, quickly and safety, from 10 weeks onwards

Juno’s Neo5® test is currently the most advanced non-invasive pregnancy screening test available for parents who need to know their baby’s risk of Down syndrome, Edwards’ syndrome or Patau’s syndrome. It also reveals the possible existence of abnormalities in the X and Y sex chromosomes.

The Neo5 test can be performed at any time during pregnancy from 10 weeks onwards. Neo5 results can be delivered before ultrasound examinations, such as nuchal translucency (12-14 weeks) and fetal anormaly scan (20 weeks). Neo5 can also be carried out at later stages of pregnancy. 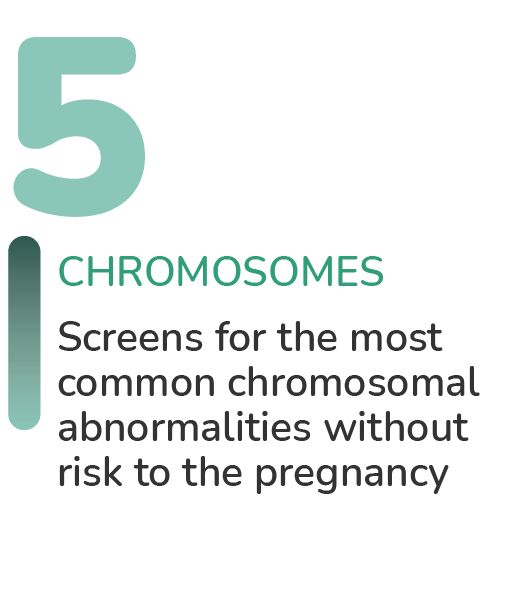 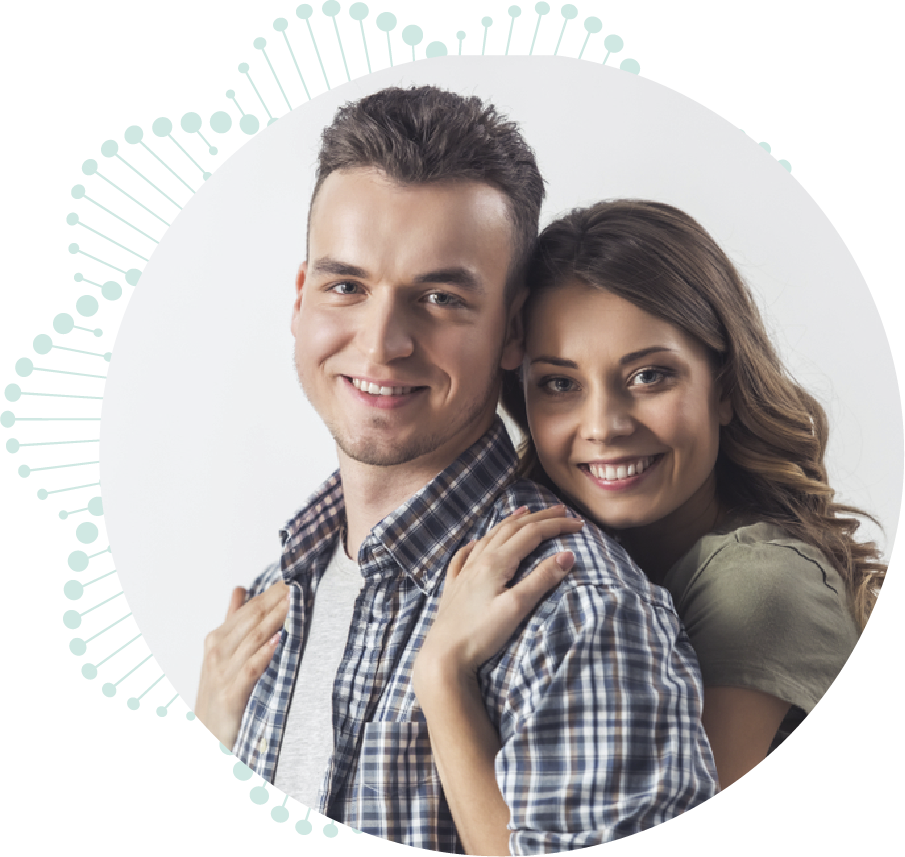 Juno gave us the chance

Unfortunately, there is a case of Patau’s syndrome in the family which made us nervous about our pregnancy. So when we saw the opportunity Juno gave us to safety test, we jumped at the chance.
Tom and Emma, Liverpool 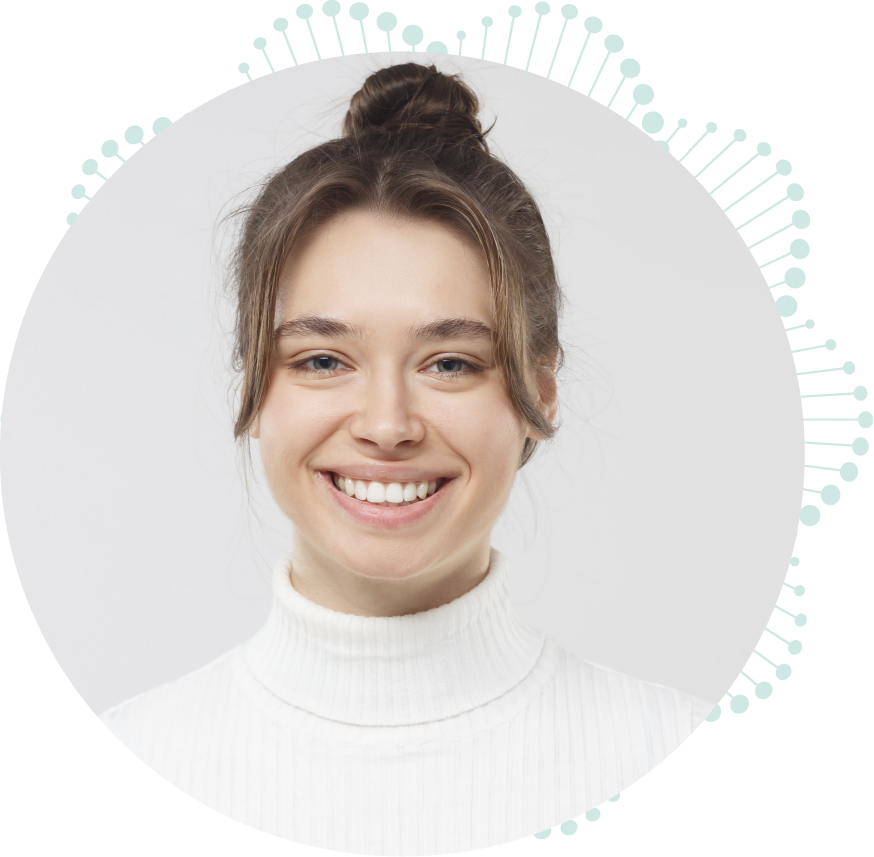 Now I just worry about enjoying!

I am aware of the number of cases of babies with Down’s Syndrome in the UK and, as a single mother, I needed to put that thought out of my mind and turned to Juno. Thanks to their Neo5 test, I finally got some peace of mind.
Kate, Sheffield 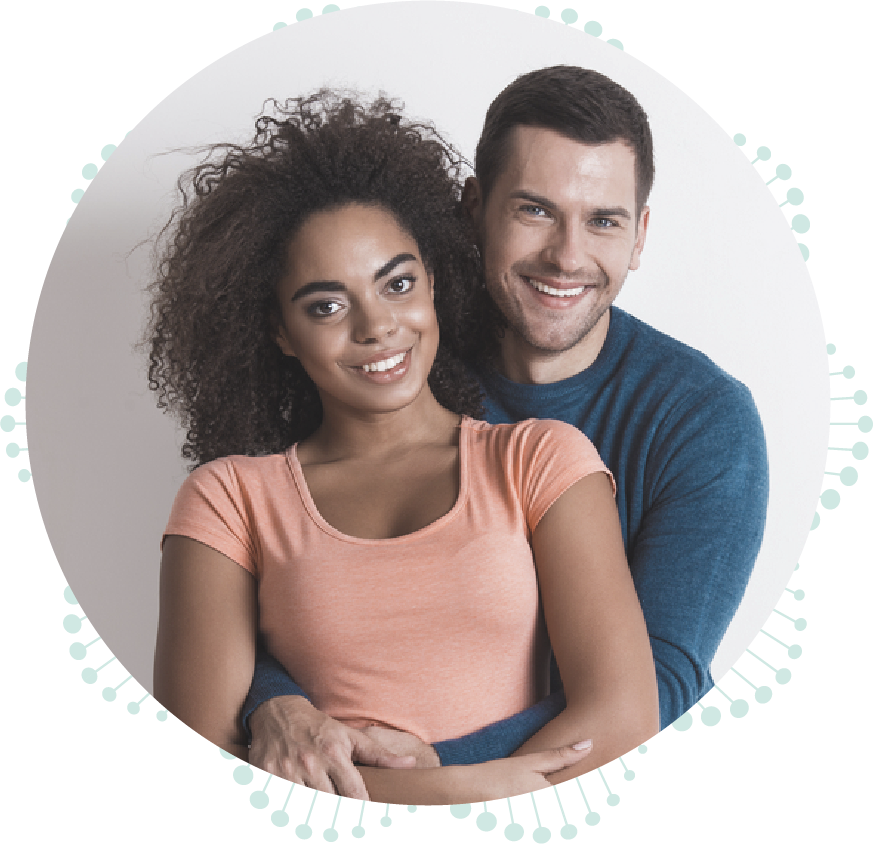 Best decision in a long time

We were concerned that, being over 35, our baby was at risk of having a chromosome abnormality. To clear up any doubts, we turned to Juno and its Neo5 test. It was a great success. Everything was very straightforward adn the results. Thanks for everything, Juno!
Harvey and Julie, Bristol 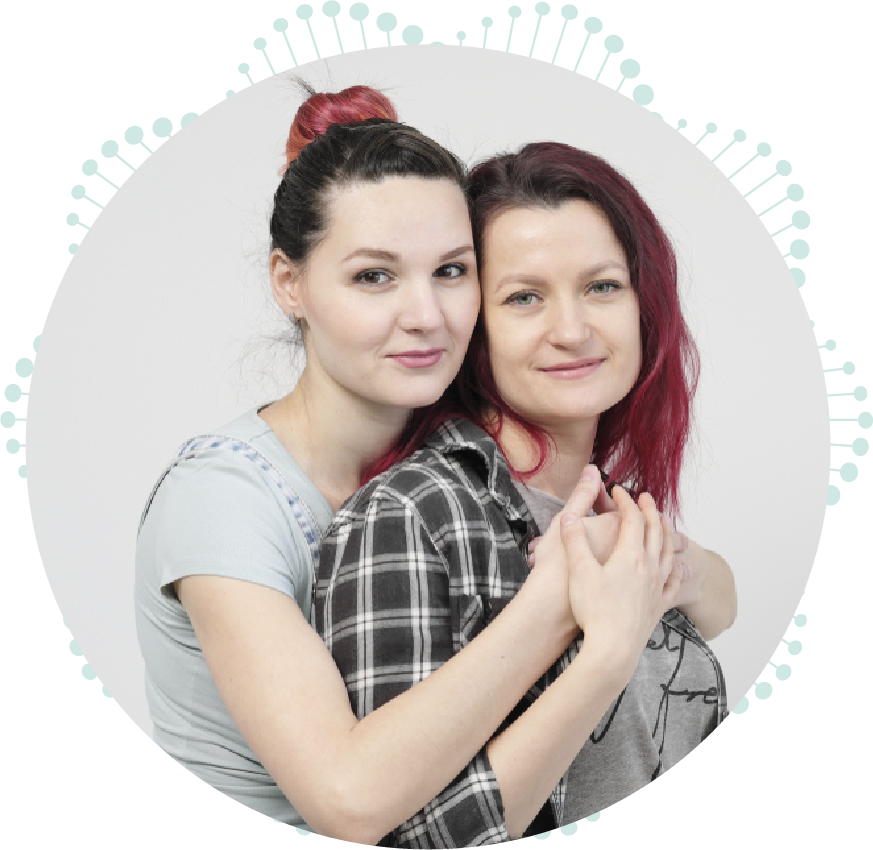 We needed to get out of doubt

After the last ultrasound, our specialist detected an increased risk of a chromosome problem in our baby. We needed to confirm this, so he recommended the Juno Genetics Neo5 test. We were immediately attended to and the results, fortunately, were the best possible – Juno put a smile back on our faces!

The answer you need when you need it.

Neo24 is a non-invasive prenatal test, performed with maternal blood, completely safe for the mother and her unborn child. We analyze the 24 chromosomes for the peace of mind of future mothers. The test anables established pregnancies (from 10 weeks of gestation) to be assessed for a wide variety of chromosome abnormalities that can lead to late miscarriages or the birth of a child with serious congenital abnormalities. Neo24 offers a high detection rate for the specific chromosome abnormalities tested and a low false-positive rate. Importantly, the non invasive nature of the test means that it does not increase the risk of miscarriage unlike traditional invasive prenatal tests. 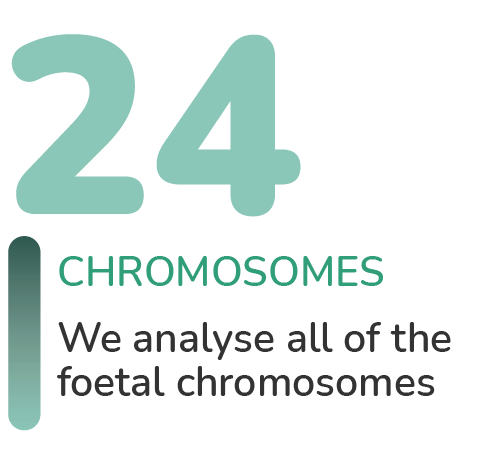 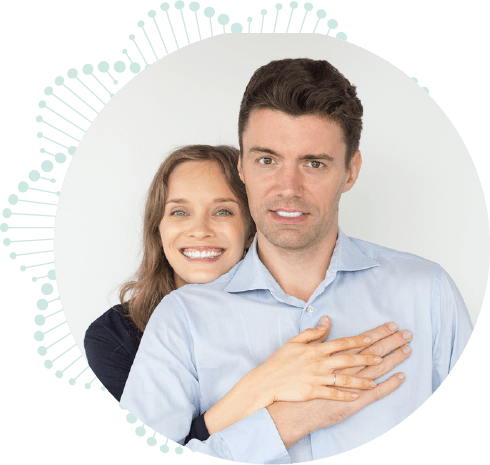 Not only for assisted reproduction treatments

In our case, the pregnancy was by natural conception. But in my family there are some cases of babies with anormalities and we wanted to be sure. When my gynecologist told me about Juno Genetics we didn’t hesitate. They put our minds at rest right away, in just 7 days we had the results. Thanks very much, Juno! 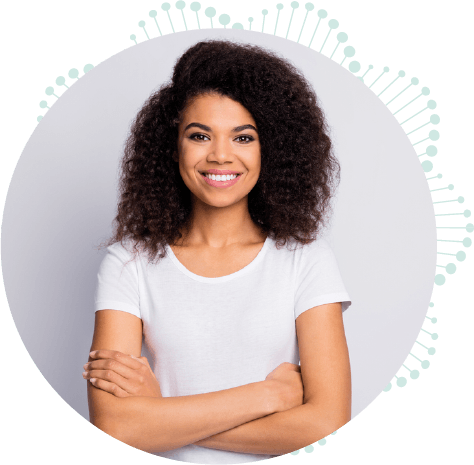 I was worried that the treatment might cause a problem for the baby or for me. But at Juno Genetics they showed me that the test is totally harmless for both of us. As the samples are obtained by a simple maternal blood test and not directly from the fetus, there is no risk. That was very important for me. 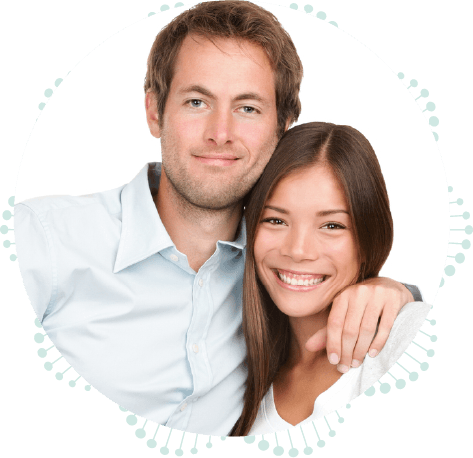 It gave us the confidence we needed

A couple of years ago, our neighbours had problems during their pregnancy. Which is why, when our day came, we had doubts. We needed to set our minds at rest and my doctor recommended Neo 24 by Juno Genetics. They helped us from the first minute, and thanks to their non-invasive test we know that, for now, everything is going normally. Thanks so much, Juno! 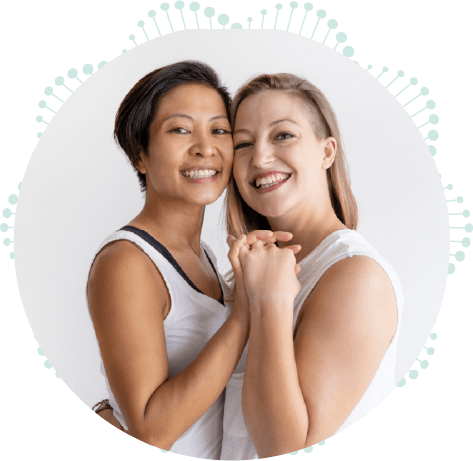 It also works with our twin pregnancy

We are pregnant with twins, and our gynecologist recommended us to take this test. They confirmed that their test also works with twin pregnancies, which was a relief for us. Results were delivered faster than expected. We are delighted with the treatment and their professionalism. It has been a great experience!

And for those who still need more, at Juno we have the Neo24+ Test.

Analyzes all 24 chromosomes, and identifies microdeletions related to 6 genetic syndromes.

*The microdeletion region is the same region for Angelman and Prader-Willi syndromes (15q11.2). Neo24+ does not distinguish between these two syndromes. An additional test is required to confirm the syndrome in question. 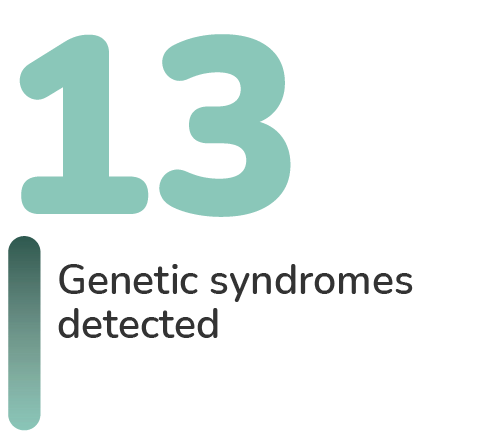 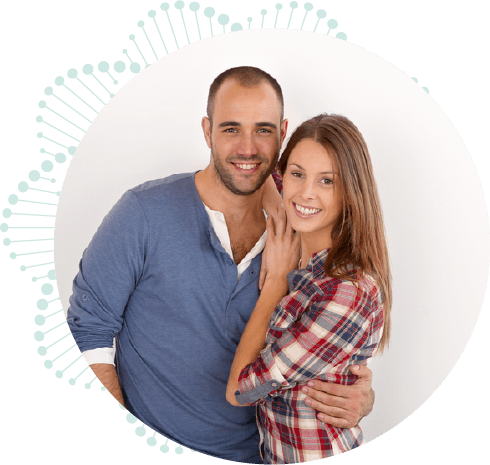 From restlessness to tranquillity

We had been worried for some time that the fetus might have a problem. So, after some consideration, we decided to call Juno Genetics. When we saw the tests they offered, we didn’t think twice: we went for Neo24+. Because there’s nothing like complete peace of mind. Thank you, Juno!
Jack and Amber, Bradford 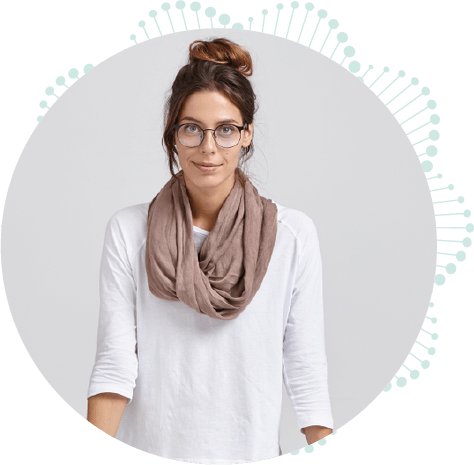 Now I feel I can do anything

The truth is that I didn’t know Juno Genetics very well, but when I visited their website, it was clear to me. I know of friends who have had a baby with problems and that uncertainty affected me too much. I took the Neo24+ test because it is the most complete and everything went well! Now it’s time to face pregnancy
Leia, Newcastle 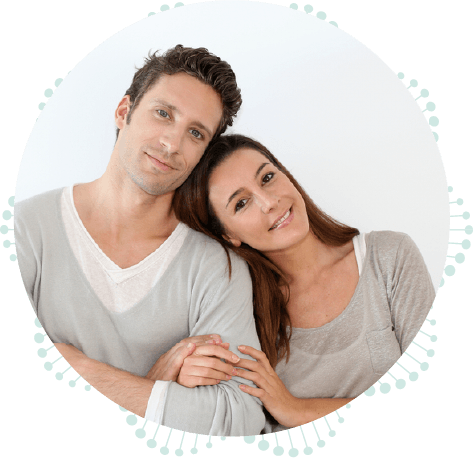 The news we needed

We knew that the Juno Genetics Neo24 test is able to detect 7 genetic alterations, but there have been cases of malformation in our families and we wanted to be 100% sure. That’s why we turned to the Neo24+ test, which detects up to 13 different syndromes. We needed to know that our baby is healthy. Thank you!
Harry and Nora. York 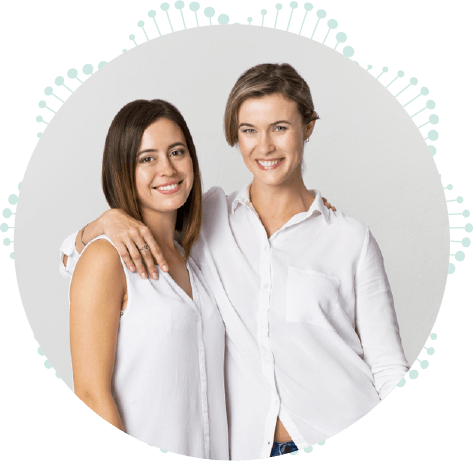 The Juno Neo24 test is great because it is able to find 7 genetic abnormalities in the foetus, but the Neo24+ test is a marvel. We took the test and, to our delight, it came back negative. So we are practically sure that the baby will be born healthy – something like that is priceless!